The Watch That Will Get You Fit

The Watch That Will Get You Fit.

It’s perverse that you’re expected to overhaul your wobbling body in January, a month where the hours you’ve got free to exercise are so dark and cold NASA scientists peer at them with enormous telescopes. Which is why you need a timepiece that nags you into to dealing with a month spent inhaling Stilton and mince pies.

The Withings Activité keeps tabs on your steps and how many miles you clock up, to encourage you to shun the car and walk to work, even when it’s so cold sensible mammals are hibernating. And unlike your colleagues, with their Buck Rogers smartwatches, it houses its clever technology in a Swiss-made case that’s indistinguishable from your everyday timepiece. Smart, in every sense. The Watch To Blow Your Bonus On

If 2015 was a particularly strong year for your hedge fund, then you’ll want to mark it with something that explains that fact, so you don’t have to. Launched at last year’s Baselworld, the new Rolex Yacht-Master is blingy enough to catch eyes, but pulls up short of Floyd Mayweather territory thanks to its rubber strap – the first in the Crown’s history.

Of course, they’ll tell you that it’s not rubber at all, but rather ‘Oysterflex’: a special polymer filled with tiny shards of nickel and titanium, to give elastic comfort and metallic strength. Knowledge you can bore your colleagues with whenever there’s a lull on the trading floor. The Watch That Will Get You A New Job

If you’re taking the new year, new you thing to heart and finally unleashing that ‘So long, suckas’ email that’s been stewing in your drafts folder, you’ll want some wristwear that’s going to dazzle in an interview.

Not literally, of course – unless you’re auditioning for a role in Rick Ross’ entourage, anything jewel-encrusted will have potential employers frisking you for pocketed office supplies on your way out. Instead, you want something that makes a subtler statement, like Shinola’s Runwell, which grabs the eye with a brilliant blue dial and 47mm case. 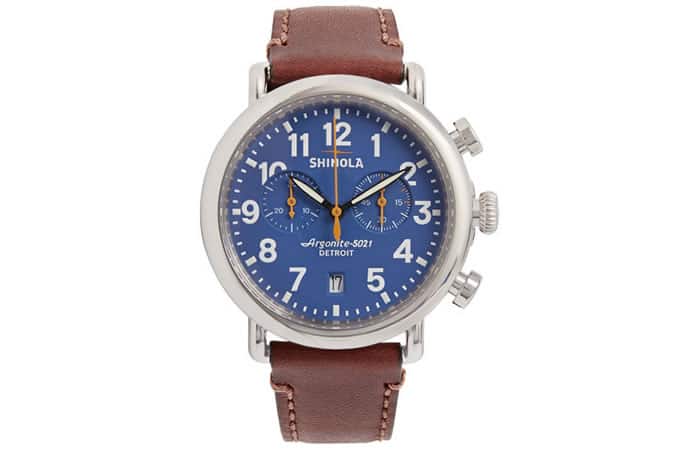 The Watch To See You Through The Apocalypse

We’re no doomsayers. But the rise of Donald Trump has got us thinking that those guys who stockpile weapons in the woods might just be onto something. So if your new year’s rethink is a touch more drastic – escape to the outback to prepare for the collapse of society-level drastic – then you need a watch that’s built bombproof, and which doesn’t rely on fripperies like electricity to keep ticking.

Citizen’s Eco-Drive watches are solar-powered, so they won’t suddenly quit when you’re fending off nuclear mutants. This model also features a chronograph, to help you work out how fast the monsters are moving, and a perpetual calendar, which offers a guide to the seasons to assist those rudimentary efforts at farming. Weaponry, you’ll have to design yourself.