6 REASONS TO GET RID OF YOUR BELLY

6 REASONS TO GET RID OF YOUR BELLY
Being overweight may not be as unhealthy as it was 40 years ago. The reason? According to a new study published in journal JAMA, better healthcare over the past four decades has meant a lower death rate for “moderately obese” people; thanks to the wonders of technology you’re more likely than ever to survive diabetes and heart disease caused by overeating.

So are you wasting your time with this exercise malarkey? Should you put down your protein shake and pick up the jaffa cakes? Not if you want any quality of life. After all, what’s the point in staying alive longer if you’re stuck in a hospital bed?

Still not convinced? Here are a half-dozen reasons that’ll put paid to your uncertainty.

It suffocates you at night

Lots of men snore, but few realise their mid-night grunting is caused by excess weight. When carrying too much timber your airway prevents oxygen from reaching the lungs and bloodstream. It’s usually excess soft tissue around the throat that’s the issue, but the Journal of Internal Medicine ID’d a positive correlation between sleep apnoea and abdominal visceral fat. Gut your gut for a better night’s rest.

Cytokines – the chemicals inside your body that informs your immune system when something’s wrong – are affected by belly blubber. “When we have high levels of visceral fat, we’re reducing our chances of letting your body know there are problems,” says nutritionist and weight management specialist Rhiannon Lambert. “The cytokines become sensitive to chemicals like insulin, which stops them doing their job. Abdominal fat is not just linked to heart disease and diabetes: you’re affecting your whole immune system.” You heard it here first – being fat makes you ill.

Most people understand there’s a link between diabetes and obesity, but visceral fat in particular is an early warning sign. “The type of fat that gets stored around our middle is linked to insulin balance,” says Lambert. “Over a long period of time, we secrete insulin when we’re stressed or eating irregularly, and the more resistance we build up the more fat is stored in that area.” Try this fat-stripping circuit to dia-beat the belly. 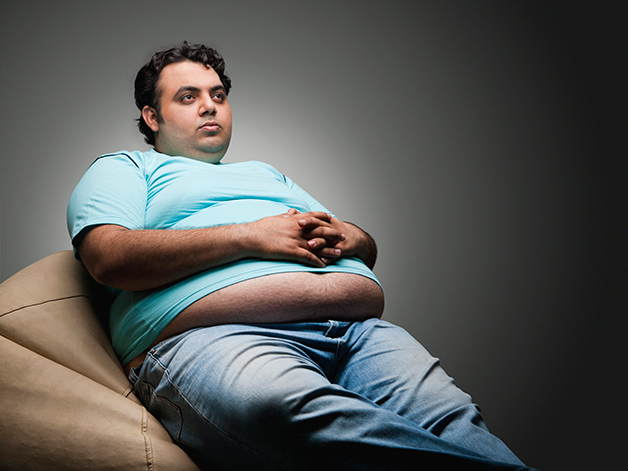 Generally, the NHS defines a dangerously large waistline at over 37”. But much like a ninja, the belly is at its most dangerous when you can’t see it. “Skinny-fat” guys in absence of muscle, often store layers of visceral fat that aren’t as immediately obvious as a big beer belly due to a similar unhealthy lifestyle, causing the same immune-system interference as their bigger brethren.

Your mate down the pub may be staunchly proud of his power-ab, but not all bellies shake like bowlfuls of jelly. “Often it’s quite solid weight, so you can have a really large belly that, when prodded, feels quite solid,” says Lambert. “That’s due to all the fat building up against the organs pushing forwards, so it’s not going to feel like flabby adipose tissue. It’s going to feel hard, an indicator that it’s quite dangerous.”

It’s common knowledge that as you age it becomes tougher to fight fat, but the sugars that do the most damage are tucked away in secret, says Lambert. “It’s in processed foods, it’s in chicken breasts that are breaded, it’s even in sliced roast chicken as a chemical called maltodextrin, basically another word for sugar.” Lambert also warns of an unexpected insulin source: sweetened workout shakes. “Protein powders are often laden with sugar. Instead of keeping blood levels stable they’re actually causing an insulin spike.” Check your shakes for sugar.